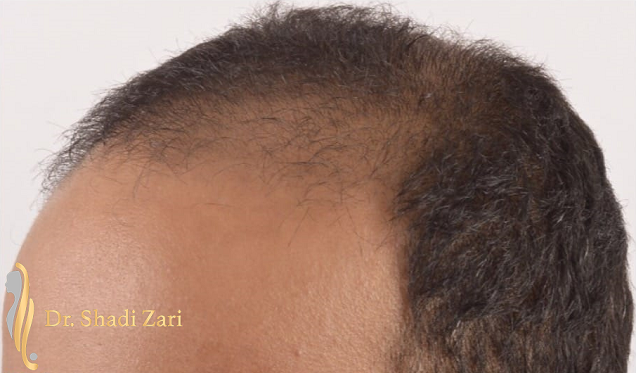 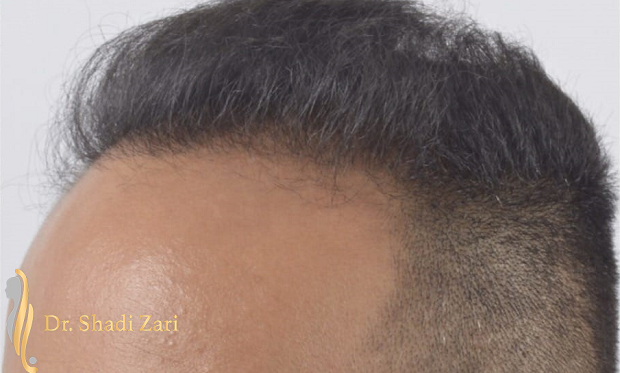 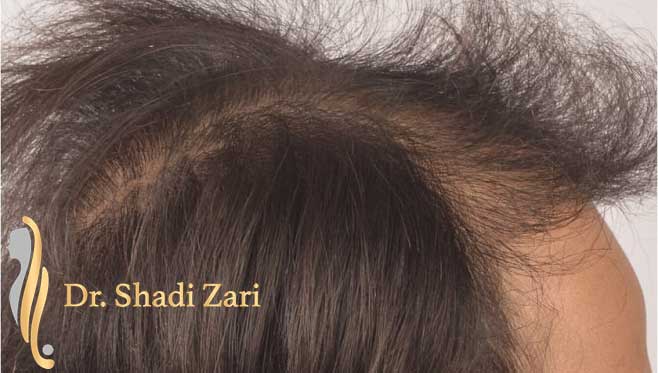 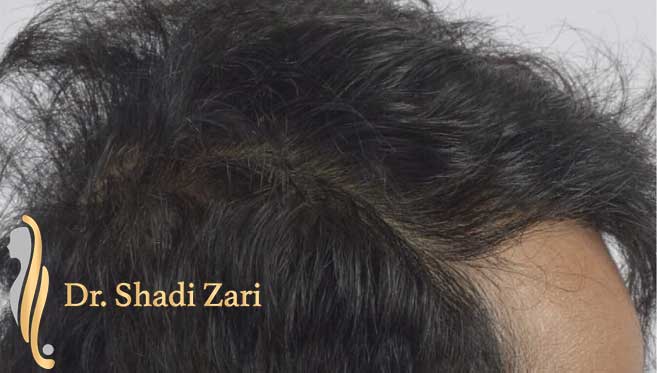 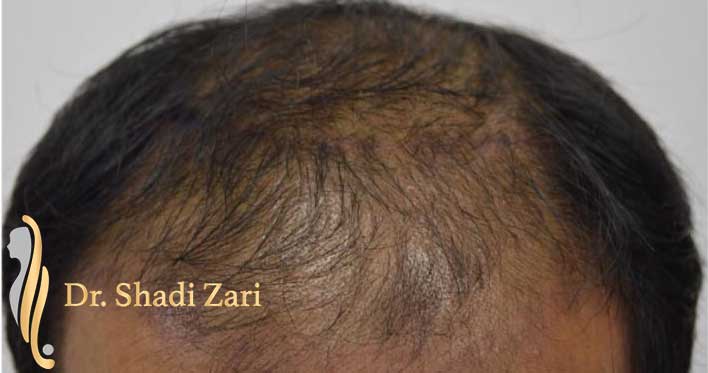 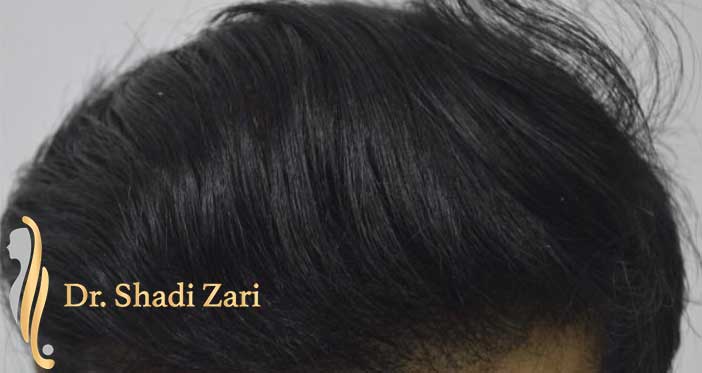 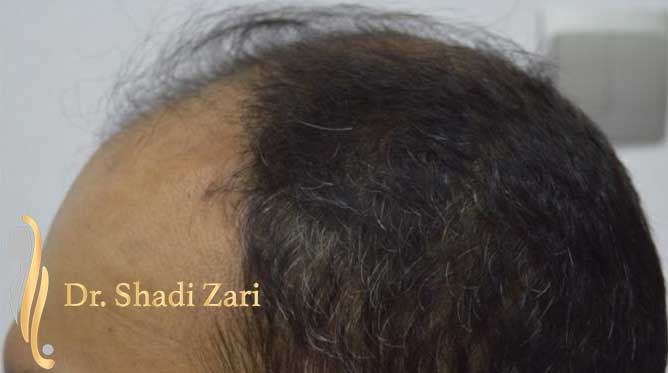 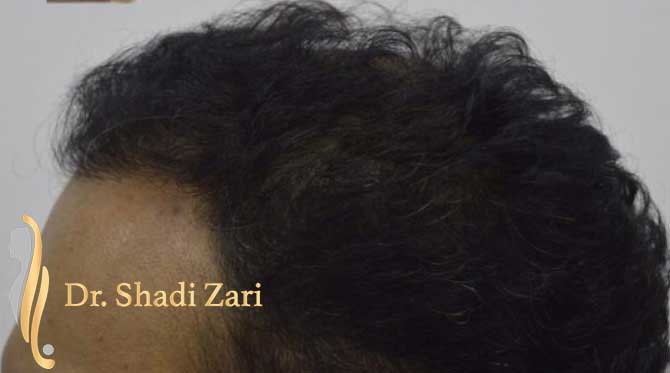 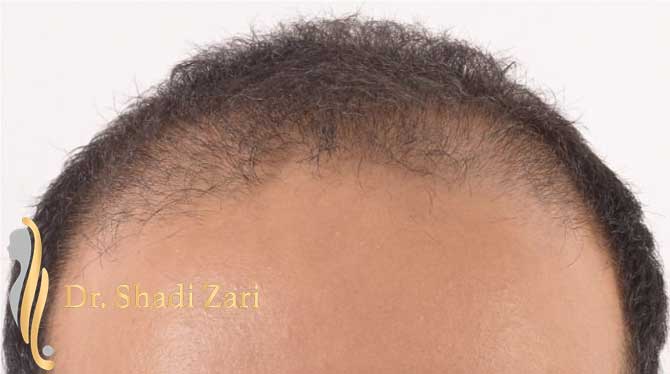 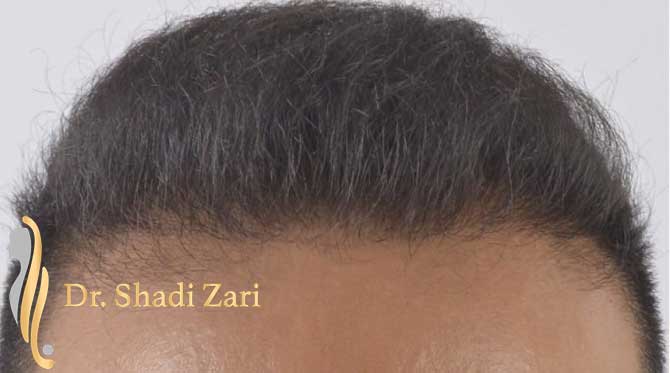 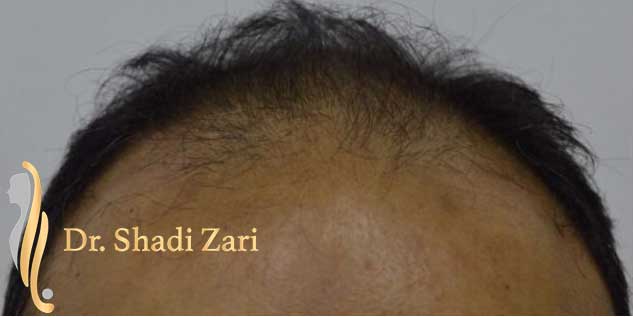 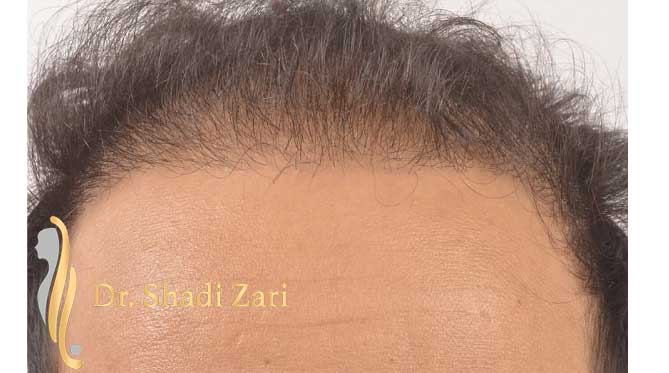 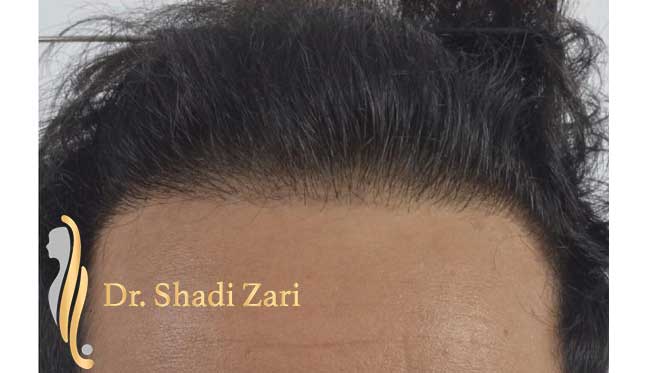 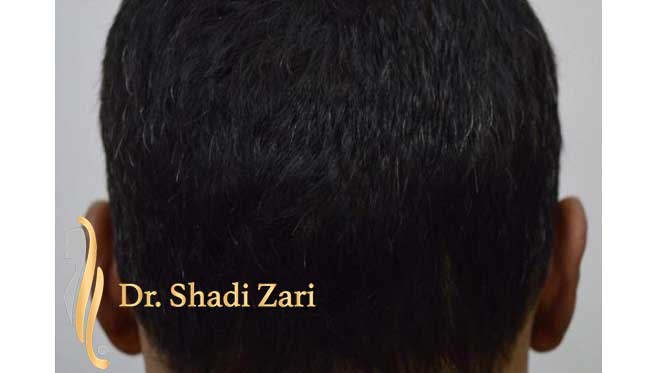 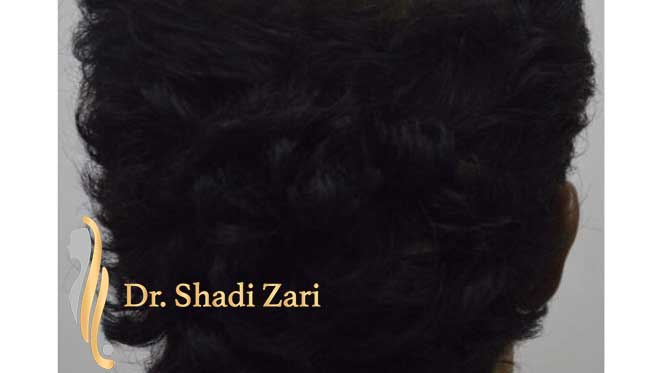 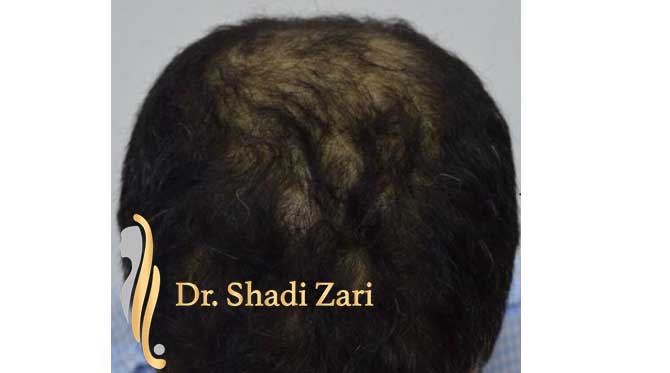 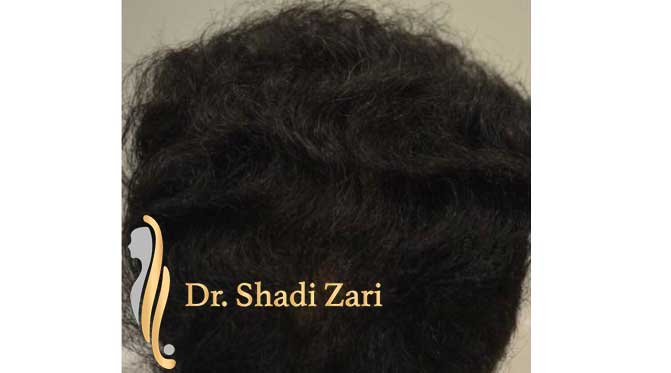 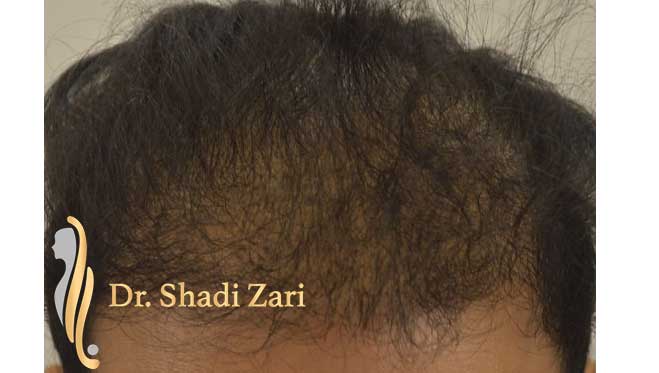 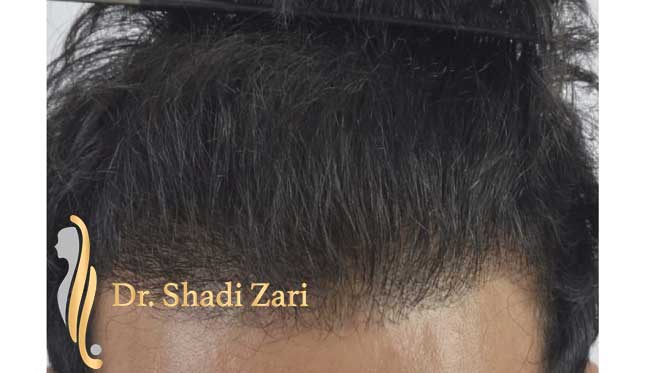 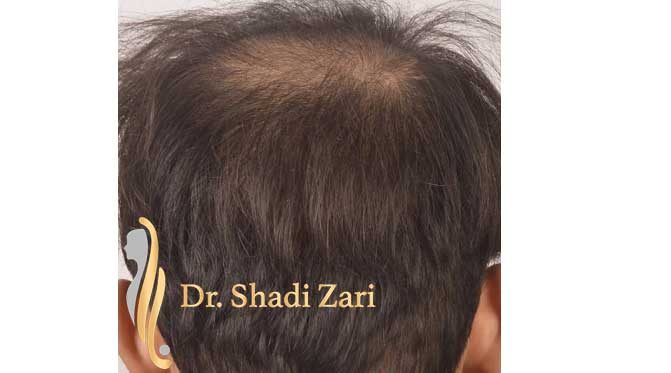 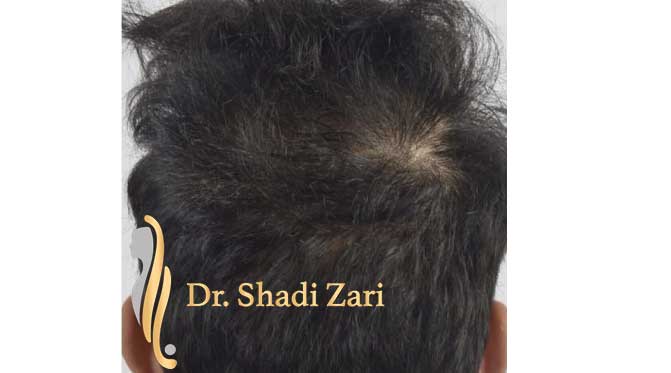 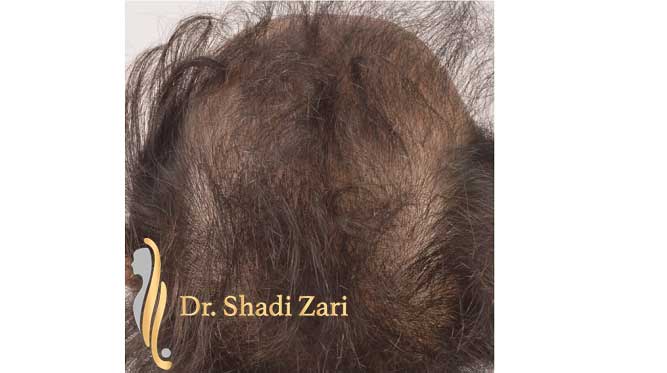 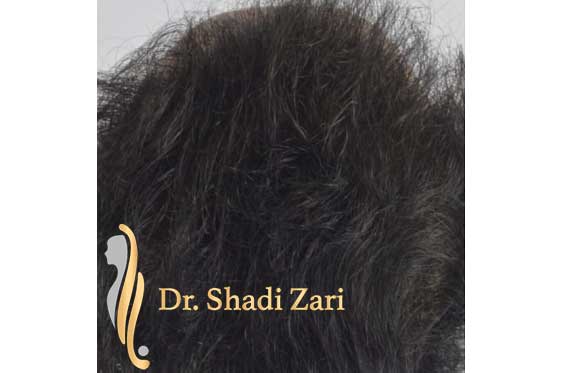 There are many causes for hair loss in men or women.

However, in the overwhelming majority of males with hair loss, the cause is hereditary androgenetic alopecia, more commonly known as “male pattern baldness.” The presence of the hormone, dihydrotestosterone (DHT), in a genetically susceptible man, is necessary for this problem to occur. Similarly, for females most patients presenting with hair loss have hereditary female pattern hair loss. This condition is still being researched, but the hormone influences on hereditary hair loss in females may be different from those in males.

Some less common causes of hair loss called “Telogen Effluvium”, which are reversible with treatment, include thyroid disease, iron deficiency, high fever, surgery or general anesthesia, “crash diets,” childbirth, and certain medications. There are also certain dermatologic scalp disorders that can result in temporary or permanent hair loss, such as lupus, lichen planopilaris, and alopecia areata.
Many myths abound regarding this topic; hair loss is NOT caused by poor circulation, clogged hair follicles, frequent shampooing, the wearing of hats or helmets, or the presence of mites.

It is also important to remember that most adults lose approximately 75–125 hairs from their scalps every day due to the natural process whereby some hairs go into a dormant state (telogen), and others come out of this state and begin to sprout a new hair (anagen). As long as the process remains balanced, the number of hairs on the scalp remains constant.

One other minor factor in hair loss is stress, which is thought to accelerate already genetically programmed hair loss. However, it probably does not cause hair loss by itself without the necessary genes and hormones. The tendency for male and female pattern hair loss is genetically inherited from either side of the family and begins to develop after puberty. Hair on the scalp that is genetically susceptible to androgenetic alopecia (generally the front and top of the scalp), starts to shrink in its shaft diameter and potential length during each 3 to 5 year “life cycle,” until it eventually disappears.
The hair on the back and sides of most men’s scalps is usually genetically “permanent” hair, which is destined to remain for that man’s lifetime.

* Results may vary from patient to patient

What can be done about male pattern hair loss?

Topical minoxidil (Rogaine®) has been around for over 15 years and is helpful in slowing down hair loss, but less effective in helping new hair to grow. A higher concentration (5% solution) of minoxidil is now available for men and has been shown to be more effective than the 2% solution. 5% minoxidil solution is generally not recommended for use by women because it may stimulate the growth of facial hair, and also because at least one study suggests that it is not more effective than the 2% in females.
Finasteride (Propecia®), an oral medication approved only for use by men. Through scientific studies, it has been shown to re-grow hair in a significant number of men and stop hair loss in an even higher percentage.* Finasteride works by decreasing the formation of DHT, a hormone responsible in large part for male pattern hair loss, while not reducing testosterone, the overall male hormone responsible for masculinity. Therefore, any side effects that may involve male sexual function are mild and occur in less than 2% of all patients. Finasteride has been available for over 10 years and has been shown to be safe and effective. Finasteride (Propecia) works best for early or moderate hair loss. It is often used as a complementary treatment for hair transplant patients.

What are the emerging therapies for hair loss?

The herb saw palmetto used in a number of topical treatments and oral supplements. Platelet-Rich plasma (PRP) injections used alone or in conjunction with other mentioned treatments.
Hair restoration surgery (hair transplantation) does exactly what its name says it does-it restores hair to areas of hair loss. It is a cosmetic procedure. Its purpose is to improve the esthetic image of the man or woman who has experienced loss of hair and wishes to restore his/her appearance. It is a highly successful procedure that achieves the satisfactory outcome desired by the great majority of patients.*
Although hair restoration surgery is considered “cosmetic surgery”, it is a surgery that gives back all or part of what was lost. Satisfied patients report increased self-esteem and “one less thing to worry about”.
One of the keys to satisfaction for both patient and physician hair restoration specialist is for both to understand one another thoroughly before hair restoration surgery is undertaken.
Who should have a hair transplant or hair restoration surgery done? Males and females with genetic hair loss “androgenetic alopecia/ pattern hair loss” who do not respond to medical treatment. Patients who lost their hair in the site of a previous scar. This can result from a previous surgery, trauma, or burns.
What are the methods of Hair Transplantation? FUT (Follicular Unit Transplantation). FUE (Follicular Unit Extraction).

How is hair transplantation performed?

Hair transplantation involves removing permanent hair-bearing skin from the back of the scalp (donor area). Then, using magnification, the tissue is dissected into follicular unit grafts (containing 1–4 hairs). These small grafts are then meticulously planted into the bald or thinning area of the scalp (recipient area) so as not to injure any follicles already existing in the area and at the same exact angle as the other hairs present. The creation of very small follicular unit grafts has enabled the hair surgeon to create very natural, feathered hairlines, which do not have the abrupt, “pluggy look” that was commonly seen in hair transplants of years past. Depending on the degree of balding in the frontal, mid-scalp, and vertex (crown) areas, usually 2–3 procedures are performed, with the number of grafts used varying tremendously, based on the area of potential alopecia, the patient’s “safe” donor supply, the textural characteristics of the patient’s hair, whether or not multi-follicular unit grafts are used in.

What happens during a hair transplant procedure?

Hair transplantation surgery is considered to be “minor out-patient surgery.” Hair transplant procedures can take 6 -9 hours and are performed using local anesthesia on an outpatient basis, often with some supplemental oral medication for sedation. Patients are often awake, but feel very relaxed because of the effect of the sedative. There is typically little discomfort during the surgical procedure. The donor areas, where the grafts have been harvested, are usually closed with sutures. These are usually removed in 10–14 days. Dissolvable sutures may occasionally be used in order to eliminate the need for you to return for suture removal.
The recipient sites, where the grafts are placed on top, are essentially small, superficial needle holes or slits in the skin of the scalp. At the end of the procedure, either a very light dressing is applied. At the conclusion of the procedure, Dr. Zari usually checks the final placement of the grafts, and he explains the postoperative instructions.

What happens after hair transplant surgery?

Hair transplantation is a very safe, relatively minor surgical procedure. Significant complications are extremely rare. There is usually little or no discomfort in the grafted area. Most patients feel some “tightness” in the donor area for 1–4 days* and are prescribed a mild analgesic to help cope with this.. Small crusts may form on each graft, and these can usually be camouflaged by any existing hair that can be combed over the recipient area, or with camouflage products. These crusts will flake-off by 5–10 days after* the surgery. The transplanted hair seen growing out of the scalp may initially be shed; however, the roots remain and will be dormant for 14 weeks,* at which time the new hairs will all begin to grow. Numbness that may occur in the donor or recipient area usually disappears within 2–8 months following surgery.*
As stated above, complications are rare. Minor inflammation can occasionally occur around a newly transplanted hair follicle, similar to an infected ingrown hair or pimple, and usually responds to simple warm compresses. The scar that occurs in the donor scalp as a result of the removal of donor skin is usually quite narrow and can be easily hidden by the surrounding hair. The graft sites in the recipient frontal area heal with almost no visible scarring and are covered by the transplanted hair. A minority of patients may experience mild swelling in the forehead area for a few days following surgery. It typically appears around the 3rd post-op day and goes away after 3–4 days. Infection in either the donor or recipient area is extremely rare. Many patients experience a small area of numbness above the donor scar and in the rear central scalp that gradually disappears after a few months.
When is the best time to have a hair transplant surgery? Certainly the older the patient is when beginning transplanting, the easier it becomes to determine the eventual size of the bald area and this minimizes the possibility of unanticipated areas of baldness appearing over time. Therefore, most surgeons prefer to operate on older patients.
On the other hand, there are many advantages to beginning transplanting before the thinning becomes noticeable. The patient does not have to go through the psychological impact of obvious balding or being bald.
If you transplant into a hair–bearing, the hair density that is initially achieved will be much greater than it will be much greater than it will be when the untransplanted hair in that area eventually falls out years later.
The change of appearance will be less noticeable to others if there is pre-existing hair in the transplanted area.
Makes it easier to coumflage the incision sites postoperatively.
It usually allows the patient to spread the cost of transplanting different areas over a longer period of time.

What are the advantages of FUT?

FUE is a method of obtaining individual FU directly from the scalp, instead of microscopically dissecting them from a strip of donor tissue that has been excised from the scalp.
A small sharp punch, usually 0.8 to 1.0 mm in diameter is used to superficially incise the skin around the FU, which is then extracted with a combination of pressure or tension.